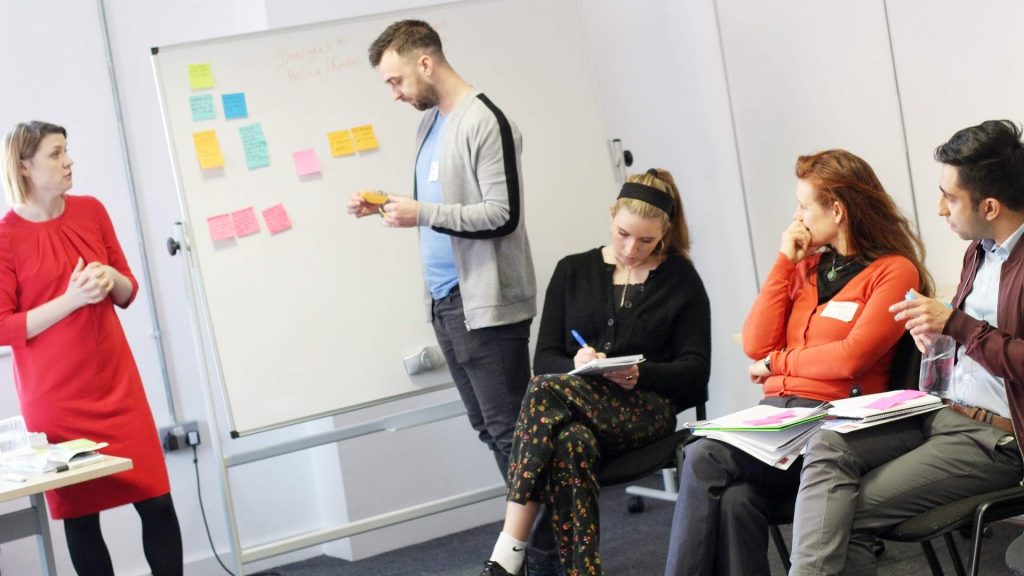 Trelya operates out of a small building, 15 minutes walk away from the seafront on the Western tip of Cornwall.  The local road signs direct you to Lands End. Much of what little space the charity does have is given over to children and young people: there is a nursery on the ground floor whilst the first floor is filled with sofas and beanbags and stools, as well as some kitchen facilities and a pool table. Since 2001, young people have come here to feel safe, to be supported, and to develop essential life skills.

The support Trelya provides to each young person is different, tailored to their needs and circumstances.  Sometimes these interventions can appear quite small: a warm room in which to sit, a guitar on which to practice, or a trip to the beach.  Sometimes they can be more obviously life-changing: helping young people to overcome addiction and substance misuse, helping to pay for or arrange transport to a job interview, or helping them navigate moving into new accommodation.  Underpinning all this work, large and small, is constant and consistent support from Trelya’s staff.  This support builds children and young people’s self-esteem and can often be instrumental in their successful engagement with education and employment.

Trelya’s initial application to The Listening Fund was focused on developing effective systems for collecting peer-to-peer feedback.  They would then empower young people to use the information they had gathered to work with a variety of local service-providers, collaborating to remove barriers to their offerings. However, young people quickly made it clear that before they were ready to listen, they wanted to have their own stories and experiences heard, and to present them through high-quality platforms.

The ‘Pass the Mic’ project has therefore changed.  Trelya are now supporting young people to work with local writers, capturing their experiences of engaging with different organisations and the services they offered.  These written pieces will then be performed by an actor, recorded and made available to different audiences via a ‘telephone box’.  The idea has already generated a lot of interest, whilst the preparatory work and the deeper engagement with young people has led to changes at Trelya itself.  On a recent visit, Trelya staff shared with us some key lessons from their first year of ‘Pass the Mic’:

1. Listen to feedback on your listening – the additional capacity provided by The Listening Fund allowed Trelya to consult more extensively with young people on their plans.  As a result, they realised that their initial proposal for ‘Pass the Mic’ wasn’t what young people wanted or needed. The revisions to the project have been extensive and have fully involved young people in not only identifying shortfalls to existing proposals, but also developing alternatives and overcoming associated barriers.  There is now a strong sense of ownership of the project amongst Trelya’s young people and the organisation is benefiting from a deeper understanding of the needs and motivations of those with whom they work.

2. Seek and embrace external expertise – although the in-depth discussions with young people helped Trelya determine what sort of work was needed, the staff were not confident that they had the skills and experience in the team to successfully deliver the project the young people wanted.  However, rather than using this as a reason to stick to their original proposals, Trelya consulted with charities who had experience of using creative methods and dedicated some of their budget to working with local writers and artists.

3. Be ready and willing to change but be honest about the process – the in-depth consultation with young people has caused Trelya to think about the other support they offer and whether this can be further improved and developed.  Whilst some of the changes have been small and easy to implement, what some young people have asked for would constitute developing and delivering new services. This requires careful consideration by Trelya and they have worked hard to maintain communication with those affected whilst taking time to consider how they can deliver the best possible support.

Working with The Listening Fund has not been straightforward for Trelya – they have not only overhauled their project but also been challenged by what they have heard to reevaluate their existing work and services.  They hope their ‘telephone box’ can help encourage other local providers to do the same.

PrevPreviousA visit to: Carefree Cornwall
NextListening for Change: The Centre for Youth Impact’s interim findings from the Listening Fund EvaluationNext